A downloadable game for Windows

NOTE: This is a very early version and is mainly more of a proof-of-concept than anything else.

Prepare to build an industry among the asteroids of the Outer Belt!

Be warned though, this belt is not yours alone.
Can you industrialize the Outer Belt?

The game is currently very cryptic, unbalanced, and missing a lot of quality-of-life features. The most important of which is the ability to save / load the game.

The best advice I can give is to hover over everything! There are tons of informative tooltips and a little bit of the fun is figuring out what does what!

Also: I'm still working on Mac and Linux builds, please bear with me! <3

This is so cool!
I think there should be a HD version of the game

This is fun! I'm looking forward to the patch adding the ability to save/load.

Is there (or will there be) any way to automatically send a material from a warehouse to a factory? I've tried pumps and ports, neither seems to work. It makes sense a pump (as it's currently working) wouldn't work since it only holds one element at a time, and it might grab an element the factory doesn't need. But I would think this would be the sort of thing a port would be good for.

Thanks so much!! There's no way to do that just yet, but I'm working on sorters for the next update!

Well considering the stage of the game I've gotten as far as I could. I was going to try to see how the bombs work, but requiring hydrogen was an oversight. It makes sense and isn't a big deal, other than not being able to transport O2 or hydrogen... which was another oversight on my part. Transporting water is fine though. The only problem is that it's impossible currently with how aggressive the enemy is to take control of asteroids after they start to infest your area, they just simply reinfest right after a bomb. I was expecting to be able to designate a target or just launch them when I'm ready to clear multiple out at once, but that was another oversight that I wasn't expecting I wasn't going to be able to do. Can't wait to play after the balance patch comes. I'll go back to expanding before T3 Tech.

Splitters or Filters that only accept a designated resource type would be great additions and looking forward to the pipe rework you plan. Drones as well, would be a good T4 or T5 Tech anything that saves room. I don't know how you plan for Drones to work, it'd make sense if they were solar-powered requiring to charge after X amount of period.

I actually really just enjoying thinking about the potential of this game. So it's easy to just want to comment thoughts about it. Certain Ideas are probably outside the scope of potential, like collision between asteroids; or just orbit around the sun. I'm sure satellites are reasonably achievable. I would like to think about what kind of Lore you can cook up with this. Could the Redacted be sentient and could they just be something that slumbers, maybe within the sun until you start generating a certain amount of activity. Maybe an end game goal like a Dyson Sphere or a Stellar Engine could be a good End Game Objective. Maybe you could implement Data Logs for each new Tech Level giving tips and develop a little story.

Thanks so much for all the playtesting! I'm going to change some stuff based on everything you've mentioned, and I'll add some of your ideas to my to-do list! Some of the stuff you mentioned is actually already on my stretch list. I'll release a roadmap sometime soon!

Currently I'm working on saving & loading, sorters, and some other secrets to make the v0.2 release juicy :D

Can't wait to see what you think!

I also forgot, well I was curious so I googled, but there is carbon in our asteroid belt, the outer part. I was going to suggest use it for an earlier form of power than the reactor and have the reactor be T6, but you're already getting hydrogen at this point. Then I thought about the drones, Carbon Nanotubes is about to replace silicon in computing, and motherboards can be made of Polycarbonate material, so a Drone plant/facility/station could use Chips+Iron+CarbonMaterial. You could use these materials that would require circuitry like Satellites. I don't think a 3 would be that much of an issue if it's the step to get drones or in the manufacturing of them. Where drones would just not require a space next to the source they're collecting from.

Fantastic visual design there, ticks all my boxes :D

Really enjoying this. I enjoy the low res, but would like to see it upped a smidge. Would also like to be able to at least be able to bring gears over in setting up a new asteroid so I can boot-start it with a mine. Otherwise quite fun with space managing factory-like game. Haven't got to Tech 3 yet because I keep messing up and running out of resources when I get to the new asteroid, but it's nice that a new game, while you kept the window open, will keep the tech you had.

slightly higher res would make it look bit better quality, like reduce pixel size by half and factor the math to scale to same size.

Thanks so much, so glad you enjoyed it! I totally agree with the gear suggestion! I'll put that in the patch this Friday :P

The option to change the resolution shouldn't be too difficult either, I'll see what I can do! Thanks again for playing!

I just learned that you can infinitely scan for more resources with the HQ node, not sure if intended but makes sense at least for the early version of the game. Why does the general scanner stop? If you already have a means of infinite resources from an asteroid, you should probably allow it to continue like the HQ, maybe reduce the payout by 1% or something each tick, and maybe the scanner is 50% or even 10% as effective as the HQ scan each tick sense it's automatic.

This isn't important or anything just kind of odd mechanic interaction.

It's definitely not a permanent solution, but I originally made the HQ scan infinite to solve a soft-lock where you could run out of resources before getting rocket tech. For other asteroids, the small meteors that hit them actually give them some scannable resources! I agree that it feels a little strange though. It's all still pretty temporary, I'll rework it in the future!

there are certain cases that pumps aren't sending goods to factories, every time it seems to be an issue with the angle of the triangles from the pump to the factory

Thanks so much for the feedback! I love your idea of having a place to see what's planned, I'll try to get a roadmap up! At the very least, if it exists in another factory-building game, I'd like it to exist here too. That goes for filtered tubes, I just haven't finished them yet :P

Tubes are also very bare-bones at the moment. In your pictures, the Port and Pump are taking from each other endlessly. For now, you can fix this by making the Port into a Pump, but expect a massive tube rework soon! Also, your idea for a Router is actually exactly what I'm working on, I'm just trying to get the resource selection UI to make sense.

I also like your idea of a mining drone. I agree that I'd like to flesh out the expansion process overall to make it less convoluted.

There is a way to deal with the enemies on other asteroids, but it's in Tech 4. For now, just don't research Tech 3 Labs until you're ready to defend; the enemy doesn't spread until then :)

Thanks for bearing with these early versions and getting me some great feedback! <3

Hey sorry for posting another message, I had a blast playing and I decided to make a vid on it! Those red rocks got me pretty bad but otherwise the gameplay is fun, I'll love to play this more and get to tier 6 tech's once saving is an option! Cant wait. Again, loved this gem of a game! (has some great potential!)

Omg tysm for playing! It's a blast watching you play!! The game is definitely rough around the edges but I'm so glad you've gotten so much enjoyment out of it already :P

A patch is coming later this week that will rebalance the tech tree so that you can set up defenses earlier, as well as adding in some new buildings and configs! After that I'm going to work on saving/loading and we'll be well on our way to v0.2!

Bro I cant wait! Will have to come back once the update roles out!!

Glad you figured out the research :P

Thanks so much for playing!!

Why are the tubes cycling recources?

(i selected the direction)

Tubes are hard to get the hang of at the moment. Here's a quick guide:

- Tube-Ports will take resources from any adjacent plots and store them for usage in construction/depositing.
- Tube-Pumps will take from the two plots that aren't selected, and push them into the selected plot.

You have to be careful you don't have 2 tubes trying to take from each other, they will pass resources back and forth!

That did not work.

I want automatic rock and iron. 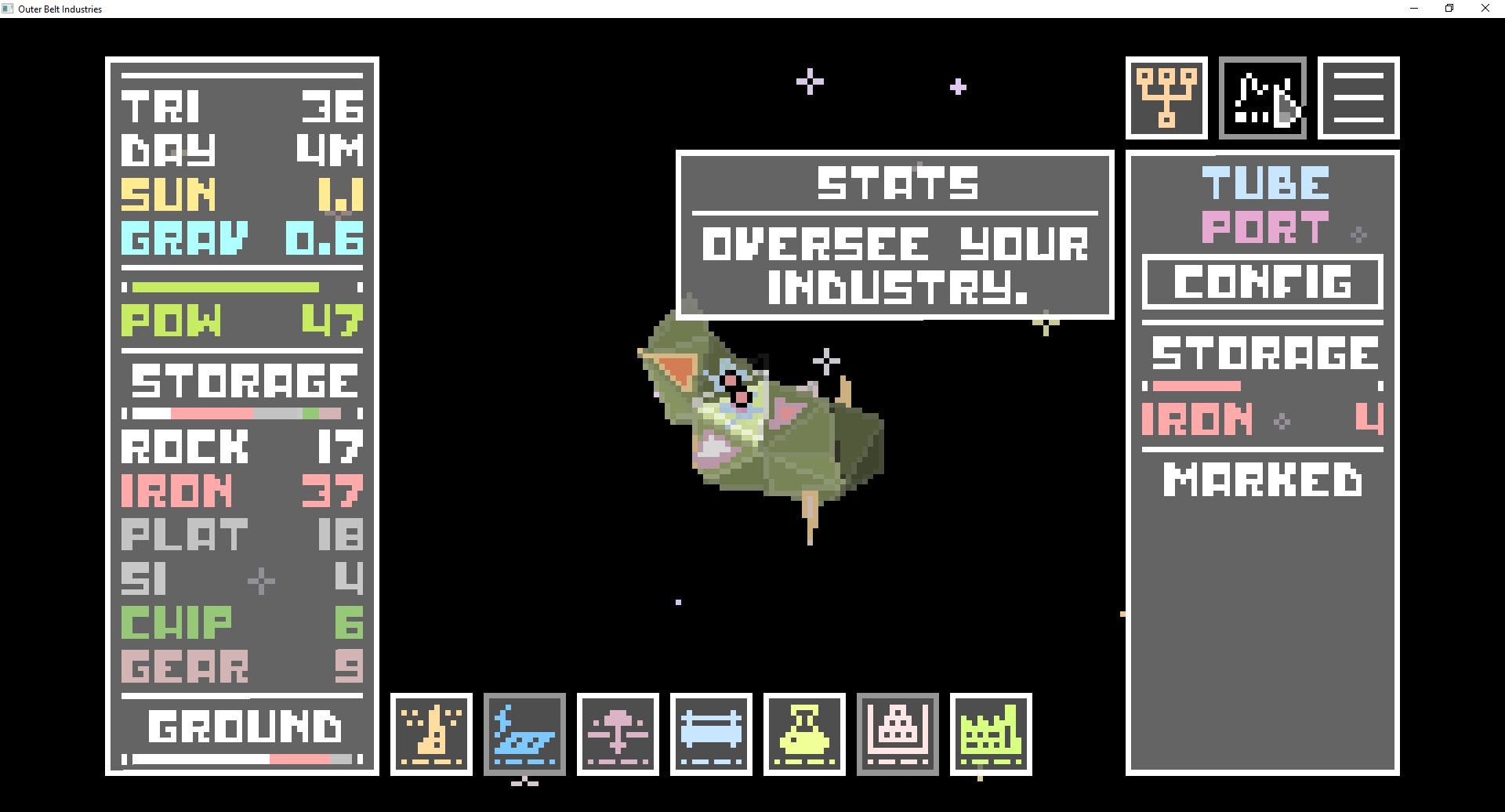 Ohh I gotcha! You should replace that port with a pump instead. BUT, you can't insert directly into an HQ, you'll need to put it in a warehouse!

The easier way to do this for now is to put one port next to an iron drill, and then another port next to a rock drill! The ports allow you to build using the stuff stored in them! Apologies for the confusion!

What an interesting and creative game idea! And I have to say I love your graphical style, it's aesthetically consistent and quite original. Well done!

Thank you so much!!

I love the game so far! The red rocks keep cucking me however. Tried to unlock the defense tower tech as fast as possible but couldn't get to it before red rocks destroyed everything. Otherwise the game is amazing! I love the music and graphics, I hope you continue to work on this gem!

Thank you!! Yeah I really apologize for the balancing issues, expect some rebalancing soon! I'll get saving and loading done for the next update too, so that you can have a long-standing war with them! So glad you like the music + artstyle too!

This is quite deep for a simple little game! There's a lot going on and some fun things to discover. It's a little hard to understand how things work at first, and an extra screen that told the controls would be nice, but everything else here is fantastic. Keep up the good work!

(That crystal is a dirty little trick, though! I wish I knew how to get rid of it...)

Thank you so much! There's a lot that I still want to do, but I'm glad you're already enjoying it! A controls & hotkeys screen is definitely needed, as well as some other quality-of-life stuff!

Sorry about the crystals, I think they're a little too aggressive at the moment! There is some tech in T3 and T4 that lets you deal with them, but I think that's too high up in the tree to be useful. I'll be rebalancing a lot in the future :P

Thanks again for playing! 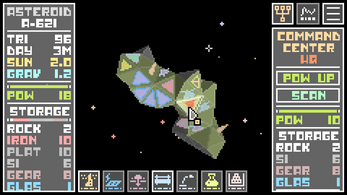 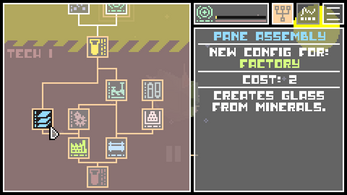